A mute child, played by a larger-than-life-sized mannequin, is being indoctrinated by various authority figures, including family, teachers, a vicar and a doctor.

My, what a terrible world we do live in(!)

Intermittent ‘alchemical dances’, in which a rock band accompanies a cat who transforms into a dragon, represent the omnipresent commercialism (rock bands, television, advertisements etc.) that we are constantly bombarded with in the modern world.

The action passes between the indoctrinating authority figures and the rock-band accompanied dragon-cat.

Oh. Well, okay then. Apparently, the awesomness of such a concept is just too much for one mannequin-child to process.
(Although, I expect Peter Maxwell Davies wants you to believe the mannequin-child went insane due to being stretched too thinly between all the different ideologies that it is expected to follow… or something.)

The mannequin-child has been taken to an operating theatre to be cured of its ‘anti-social tendencies’.

I see what they did there – an opera set in an OPERAting theatre! Very good… please tell me this pun was the reason that this entire work even exists.

More stock characters attempt to fix the mannequin-child, including a capatilist, a trade-unionist, a rabbi, more Christian ministers, a politician and a gospel-preacher.

Tell me, Peter Maxwell Davies, is there anyone in a powerful role who you do trust? I mean, kudos for sticking it to the man and all but… evil indoctrinating trade-unionists?!

…and replace each with a sanitised, ‘safer’ substitute.

I don’t think I even WANT to know what those would be… Okay, Peter Maxwell Davies, you’ve made your point. Now I’m scared and I want to go home.

The unhappy, now-indoctrinated mannequin-child, having been forcefully stripped of all of its individuality, rebels and guns down the operators and the audience using a machine gun.

Not a REAL machine gun, obviously… It isn’t a real machine gun, is it, Peter Maxwell Davies? ‘Cause, I mean, I’m seriously a little concerned about your mental stability at this point.

…and in its place the Antichrist rises theatrically from a tomb amidst a flashing disco light show!

Moral of the story: modern day commercialism is a BAD THING.

BETTER MORAL OF THE STORY: avant-garde is weird.

…Now, where can I buy a dragon-cat? 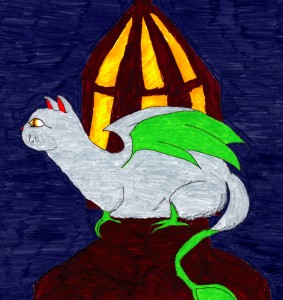 I drew a dragon-cat, which I guess is the next best thing to owning one.